Elijah has been living and making work in New York and internationally since 2006. He is a resident of Brooklyn, NY with deep ties to Ohio, California, Pennsylvania, Spain, England, Italy, Mexico and Japan. He recently returned from a deeply rewarding European Summer Tour, where in addition to performances, he fell in love with the Forest as a concept and a reality.  His mission, beyond entertainment, is to amplify the voice of The Forest, so that humans once again – and en masse – heed the wisdom contained in nature. He has released three solo albums, “Hey Day” being the most recent.

PRESS:
“Elijah’s songwriting deftly mixes elements of various genres into enjoyable concoctions. “Kicking Snow” is a wonderful number, standing apart in it’s biting blues melancholy. The crafting of this and, indeed, every song on Saturn is truly breathtaking.”
www.musicemissions.com

“You’ll find yourself immersed in Elijah’s songs to the point where you’ll mentally play his tunes as the background music to your very own life story.” Siobhan Chapman, www.indiemunity.com

“There is nothing wrong with this release. It may be a cliche, but Saturn is really out of this world!” Matthew Forss, insideworldmusic.blogspot.com

“The style of the disc is hard to pin down: just give it the label of ‘fun.’  A bit of jazz, a lot of rock from different eras…no matter the specific style of a song, everything here is entertaining and quite strong.” G. W. Hill, www.musicstreetjournal.com

“Tucker is bloody good at almost anything he touches. There are a lot of post-genre acts out there who say that no style or sound is off the table, but few make the transitions in between as well as Elijah Tucker.  ”Saturn” is [like] a good party: running with a life of its own but never quite out of control.” Wildy Haskel, Wildy’s World 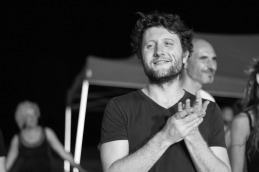